I had a very Felliniesque group encounter the other day at the "Costcos" when I went to buy another set of shelves for MJ's workroom. 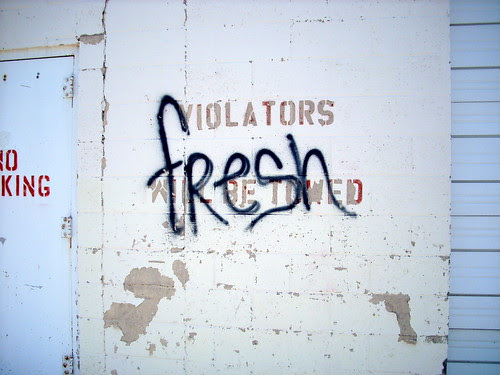 Standing in line, I saw 50-inch flat screen TVs being wheeled out in all directions by middle-aged Mexican men with iPod shuffles clipped to their shirt pockets; women, wearing variations on a theme of tan espadrilles and pencil skirts, escorted brown leather club chairs and sets of pots and pans behind the men—sure sign of more newly filled safe houses.

Suddenly, I heard a southern-sounding woman slap a boy that looked to be about four years old--her son? She slapped him in the face as he sat in the cart. It was not a loud slapping pop. Instead, it was muffled in tone. The hit sounded and looked like one might smack a puppy for peeing on a rug. Why, hit the boy, I wondered.

At that moment, I saw him try to lick her arm. Lick it like a puppy or kitten. The woman screamed and smacked him again while the man walking next to her yelled threats at the boy. His son? The child, dressed in a camouflage outfit, remained silent. And the man and woman looked around, as it to check and make sure no one had observed either them or the boy. Then they saw me watching them. Quickly, the man and woman headed for the exit while the camouflaged child silently kept trying to lick his mother again. He tried to lick her fat, pink, non-tattooed forearm. Pretty soon, it looked like he did it just to make her scream. One lick for each smack on that blonde, butch cut head of hair.

Playing PA, I thought he has a mineral deficiency, celiac, pica, or is just plain neurotic from having to endure such horrible, screaming, ignorant parents. I last glimpsed them was as they walked out the door, just ahead of another 50-inch Visio TV destined for one more quiet scared street in El Chuco.
at September 04, 2010 5 comments: