Transmountain after the rains 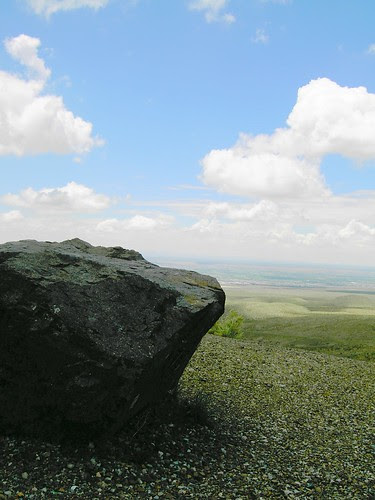 somehow this picture reminds me of Magritte. it must be the ratio of the rock to the clouds and the background valley landscape.
at August 17, 2007 4 comments: 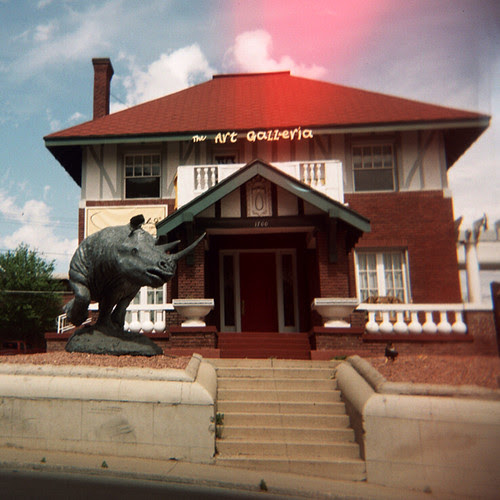 A while back, a local sculptor named Julio Sanchez de Alba, created a life-sized charging rhinoceros. Now, I don't know if his target client was the local hockey team whose mascot is a charging rhino, but they purchased it and it is now installed at the El Paso Colosseum, the team's home rink.

As this Holga photo is over 2 years old, the sculpture is gone, as is the gallery. But the house remains with a new occupant, a plastic surgeon. 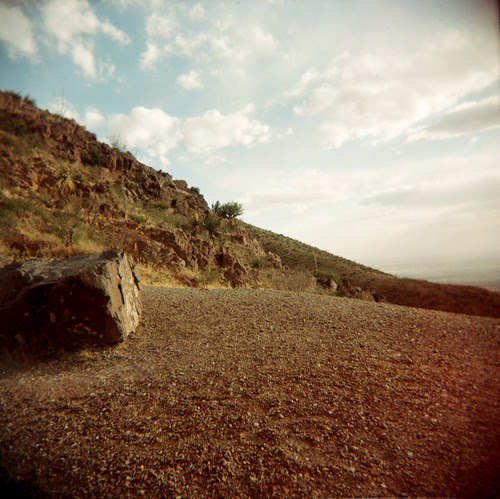 It's funny how so many people are attached to this rock. Rachel and I used to feed squirrels that sat on the big rocks while we ate our lunch. At the time, we worked on Market Center Street, which is just down Transmountain Road from the park.

Squirrels appreciate lettuces and tomato from a Taco Bell taco. They are such beggars. Many times when I go up there now, they run to the picnic tables and beg for food.
at August 12, 2007 2 comments: 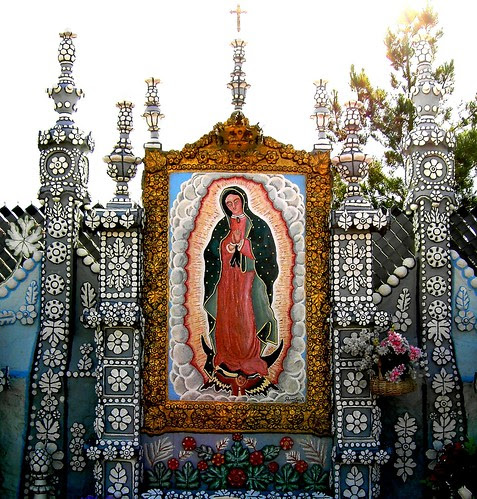 A testament to one man's faith and belief in creating a thing of beauty. Along side this shrine is a placque that reads: "...humbly we entreat you to intercede...for the families in el paso and juarez with their daily troubles." 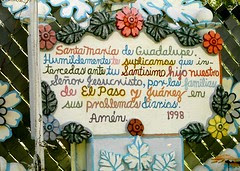 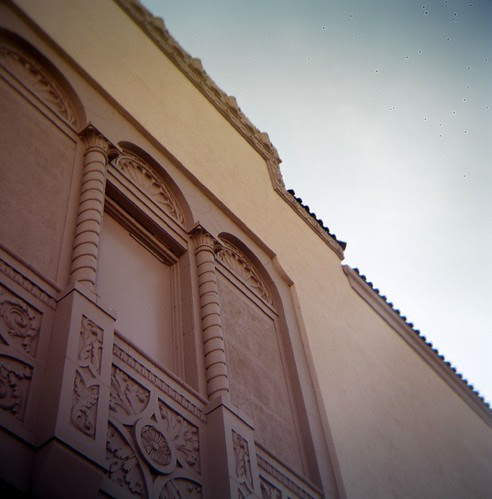 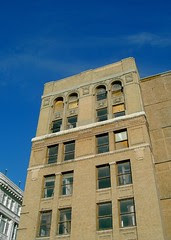 One of the things interesting about El Paso architecture, especially downtown, is the top details. This is especially so, even if a building was re-tasked or remaindered in its continual and surprising original use. For all the misuse and disarray on the first floor, many remain untouched. That is of course, unless they are destroyed from within by careless and ruthless new owners, as can be seen in the dilapidated Caples Building.
at August 09, 2007 No comments:

While on the subject, here is a photo of the old county building during its demolition. Photo taken from the 9th floor of the then El Paso Natural Gas building.
at August 08, 2007 No comments: 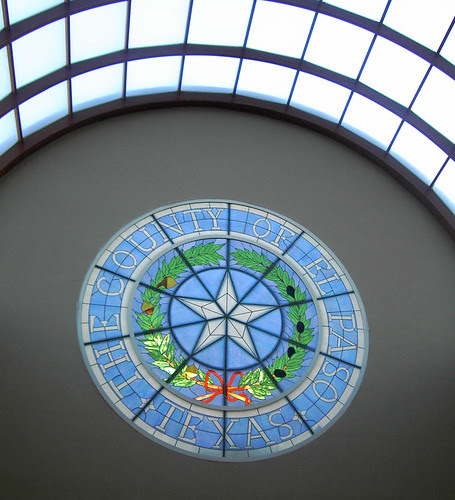 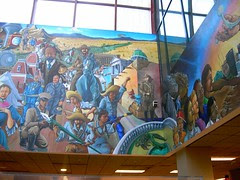 many others see the beauty and functionality of this, the newest iteration of El Paso County's signature structure. Built on the site of the previous building, the structure sports a blue mirror facade that captures a reflection of the Franklin Mountains. Within the mirrored surface, a semi-circular vault holds a stained glass county seal. Inside this area, 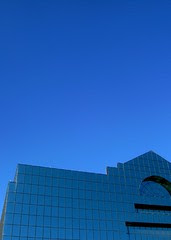 is a beautiful mural that depicts the area's multi-cultural heritage. It's too bad those resistant to change cannot see how progress can sometimes be beautiful, too.
at August 08, 2007 No comments:

One of the things I like to do is photograph the tops of buildings. While I know a lot of the action goes on in storefronts, I see the tops as the repository of a building's original raison d'être--what was and what remains of its original purpose.

In addition to this top scape of a beautiful deco theatre, is this image, which was submitted by my flickr friend, tejas962002. it shows the original facade in situ, and is not on the run like mine, which was captured while driving downtown one day and stopped at a light. here's the camera used, which is the one on the left.
Last fall, my husband and Bobby

Byrd were taking a walk in the area. Bobby led MJ into the Colón, which now sells cheap toys and other trinkets. The postive thing about the glimpse for MJ was that he saw 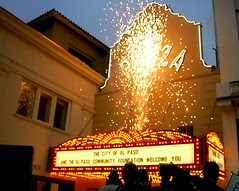 the theatre's elaborate interior is still very much in place, only the theatre seating has been removed. Perhaps it can one day be restored, like the Plaza Theatre. This image was snapped in March 2006 at the reopening celebration of the restored Plaza Theatre.
at August 06, 2007 No comments:

Thanks to DentonHarryman for the nice email letting me know the photo blog is on the Daily Photo Map. In other news, I was able to finish a website for MJ's scale model group.

The photo today is the building for Cinco Puntos Press on Texas Avenue. To me, it's about the happiest building in town.
at August 05, 2007 No comments:

Alas, the days quickly pass through my fingers 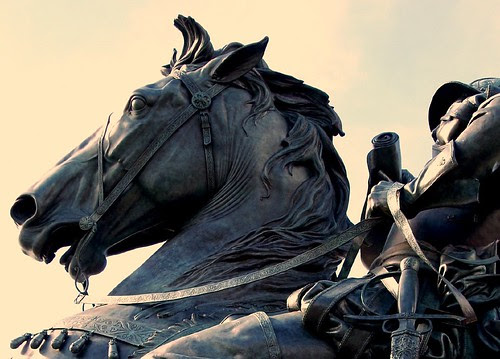 A day or so ago, I went to check on the Daily City Photo Blog website as I've found their promises and portals to be sluggish. They are not able at this time to keep up with people's posts. In fact, mine have yet to surface and so, I must depend upon a random visit or someone following from my initial post on their message board. But back to their website. Unfortunately, at the time I checked, the site was down and I couldn't see if my recent posts were connected to their site.

In the spirit of random hits and acts, here is a picture of The Equestrian sculpture by John Houser. Very controversial, and berated by some, it is touted as the world's largest equestrian sculpture. I don't know about that. All I know is that I love horses, and this one is exceptionally detailed and beautiful. It may be an inflated example of public art and artist ego, but no one can deny the effect the horse made upon the history of both natives and colonists alike.
at August 04, 2007 No comments: 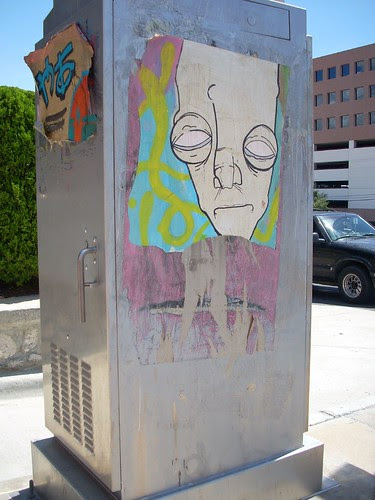 Yesterday, as the Judge and I were driving in the University area, I decided to stop at the corner of Rim and Mesa and catch this glued up guy before someone ripped him off the powerbox. While I understand powerboxes are property of whatever utility owns them, I think original silkscreens and handmade stickers and stencils are far more interesting than a burred silver surface that is a clean and boring powerbox.

This is true after someone, either from neighborhood, city, or utility company rips off powerbox artwork/graffiti that leaves a mess. Oh, yes I know. There is always the argument that all powerbox art is vandalism. But to me, it is no more vandalism than Clearchannel dirtying up free public sky space with vulgar jumbo billboards hawking $99 DNA paternity services. Yes, they do pay for the privilege of cluttering up free air space, but does that make it ethical or no less a distraction when driving the freeway? Beyond the grand commercial privilege, shouldn't there be the privilege of public art/speak? Or, perhaps all should be removed equally and thus quiet all public free space.
at August 01, 2007 No comments: