With attention on Britney Spears and the conservatorship that holds her emotionally, physically, monetarily, and psychologically imprisoned, one memoir sticks out: Frances Farmer’s autobiography, Will there really be a morning? (1973). Though portions are disclaimed, as noted in the linked Wapo article, her book nonetheless exposes how independent women (be they entertainers or not) have been “treated”, confined, and silenced. Throughout history many women have been exploited by family, society, their industries, financiers, and thieves; compounded by the medical and psychological practitioners said to "look after" their welfare and bank accounts.
My Dell paperback of Farmer's book looked like those found for highly inflated prices on Amazon and Bookfinder (ave. price over $500 for a paperback in “fair” condition). Sadly, my copy became ballast during a move; no doubt left at some West Texas Goodwill. Given the loss, at this point I am unable to reread or quote from the book; but, her harrowing journey impacted me greatly. 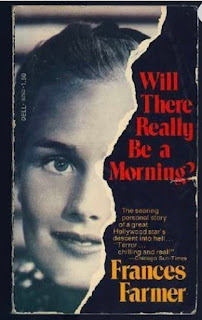 The title of Farmer’s book comes from a poem by Emily Dickinson, which echoes the questioning of the confined yet brilliant lives of Farmer, Britney Spears, and the fictitious life of the newly destitute Sara Crewe.

“Part Two: Nature.”
WILL there really be a morning?
Is there such a thing as day?
Could I see it from the mountains
If I were as tall as they?
Has it feet like water-lilies?
Has it feathers like a bird?
Is it brought from famous countries
Of which I have never heard?
Oh, some scholar! Oh, some sailor!
Oh, some wise man from the skies!
Please to tell a little pilgrim
Where the place called morning lies!

In his 1983 trace, Estrin attempts to sort Frances Farmers’ life and travels along the road that led to two biopics about her life that were released at that time. The attention that Farmer's life garnered then could be a prototype of the "Free Britney" movement, though it came too late to rescue Frances from her family, the studios, and herself.

The Unraveling of Frances Farmer
By Eric Estrin
January 23, 1983
FORTY YEARS after her name began fading from public view and 12 years past her quiet death from cancer in Indianapolis, the entertainment industry is at last attempting to give actress Frances Garmer a little compassionate understanding. Not many people made that attempt during her lifetime.
Her domineering mother, a stern, super-patriot, constantly frustrated Farmer by ranting against her idealistic career goals and political beliefs. The Communist party used the young actress in a much-ballyhooed attempt to gain sympathy for its cause in mid-'30s Moscow. The Paramount studio chiefs asked her to grind out one frothy feature after another, disregarding her consuming thirst for artistic growth.
...
But Farmer, who as a schoolgirl had scandalized her hometown, Seattle, by winning a national essay contest with an entry titled "God Dies," and again later, when she traveled to Russia as winner of a contest sponsored by a left-wing newspaper, could never make herself comfortable as a Hollywood "star." She had angered Paramount by refusing to change her name to something more glamorous; she favored old clothes, little makeup and a rattletrap jalopy as personal effects; and she became associated with unpopular political causes--like migrant workers and loyalist Spain.
In her ongoing battles with Adolph Zukor and the other Paramount power brokers, Farmer made up in ardor what she lacked in clout. After her success in "Come And Get It," she became increasingly critical of the fluffy roles she was offered, and candidly spoke of her disappointment to the eastern press. The only good thing about Hollywood was the money, she said.

In turn, the cosmopolitan stoic and orphaned hero in Frances Hodgson Burnett's YA book, A Little Princess first published in 1905, a few years into the Edwardian era.

In Burnett's A Little Princess, Sara becomes destitute upon hearing, with her headmistress, of her father's demise. In turn, she immediately is relegated to a garret above the boarder floor at her former school. She starts life as a scullery maid cum French tutor. Yet, as with Spears, Sara stoically works and remains regal throughout her reduced circumstances. As such, both strive to "go high" when others seek to see her fail and fall. And in the fictional end, it does work for Sara. It's as if she has willed the universe to reverse her economic and social situation and restart her the life she was destined to live.

...Sara looked rather pale, and it was not to be denied that she had grown very thin, her proud little spirit would not admit of complaints. She had never confessed that at times she was almost ravenous with hunger, as she was tonight. She was growing rapidly, and her constant walking and running about would have given her a keen appetite even if she had had abundant and regular meals of a much more nourishing nature than the unappetizing, inferior food snatched at such odd times as suited the kitchen convenience. She was growing used to a certain gnawing feeling in her young stomach.

"I suppose soldiers feel like this when they are on a long and weary march," she often said to herself. She liked the sound of the phrase, "long and weary march." It made her feel rather like a soldier. She had also a quaint sense of being a hostess in the attic.

What awaits Ms. Spears and her personal and professional freedoms, only time will tell. But if her recent Instagram post is any indication, what comes after her court hearing is that she will continue to work and be the person she sees herself to be. In her mind, believing in the fairytale seems to actually help a person weather any storm, and mirrors the attitude that Sara Crewe presented to the world.

Overall, I hope everything it works out for Britney and that she goes on to life the life she wants.
In her post, Spears writes:

I just want to tell you guys a little secret 🤫 … I believe as people we all want the fairy tale life and by the way I’ve posted … my life seems to look and be pretty amazing … I think that’s what we all strive for !!!! That was one of my mother’s best traits … no matter how shitty a day was when I was younger … for the sake of me and my siblings she always pretended like everything was ok. I’m bringing this to peoples attention because I don’t want people to think my life is perfect because IT’S DEFINITELY NOT AT ALL … and if you have read anything about me in the news this week 📰 … you obviously really know now it’s not !!!! I apologize for pretending like I’ve been ok the past two years … I did it because of my pride and I was embarrassed to share what happened to me … but honestly who doesn’t want to capture their Instagram in a fun light 💡🤷🏼‍♀️ !!!! Believe it or not pretending that I’m ok has actually helped … so I decided to post this quote today because by golly if you’re going through hell … I feel like Instagram has helped me have a cool outlet to share my presence … existence … and to simply feel like I matter despite what I was going through and hey it worked … so I’ve decided to start reading more fairy tales 👑🧚‍♀️🦄 !!!!!

In all, these three young women are seen bad girls in their time, and all have followers. Whether it is Farmer being loved by her audiences; Spears who is beloved for her songs, her dance moves, and her work ethic (and now those advocating for her to be released from a soul-crushing and invasive conservatorship overseen by her father); and, Sara Crewe who refused accept the servitute levied against her by her boarding school headmistress. The same boarding school that her father entrusted with her care and education. All these young women are headstrong, focused, and beautiful in their own right. Yet, they are seen as "bad girls," beginning with Frances Farmer, who Spears' life up to this point closely mirrors. Although a fictional creature, Sara Crewe was an invention, yet meant as an exemplum for all to strive to be. She is the fictional embodiment of Michelle Obama's motto: "When they go low, we go high."

In grade and high school, aside from learning to appreciate fountain pens, reel-to-reel three-head Sony tape recorders, Hartmann luggage, Leica and the tiny Minox "spy" cameras, Crane notecards, and Lenox china and crystal, I read many books while standing around the regional department story where my parents worked (for a combined total of about 55 years). Whether I was standing and reading at The Popular’s Bassett book department, or sitting on the cool lino at its downtown store's small stacks on the mezzanine floor, I was free.

To me, the book department was a secret club hideout for one, with the bonus that its stacks overlooked the accessories and greeting card departments. I was a spy. While reading, I was comforted by the elevators softly dinging bell when it stopped on the floor nearest to my dad's departments and the book, camera and sporting good, luggage, stationary, and fine china departments. Sitting amid the paperbacks I read, listened, and absorbed it all. The book department was my hide. It was time away from school bullies, homework, and helicopter parents even though they were nearby. The store had no literary gatekeepers, unlike the librarian I  encountered at the downtown public library. (How could the life of some random nun become saint be off limits for someone under 12? And, I know it wasn't the life of St. Augustine.) At the store, I could read Shirer's tome, which I carried around for weeks, but a random saint? Guess not.

Beginning with a paperback by another Frances (Hodgson Burnett) and her YA fairy tale A Little Princess, a book about a "stoic" young girl named Sara Crewe, I surreptitiously read books by Heinlein, Hesse, Maugham, Tolkien, and William L. Shirer. The reading list was of my devising and what drew me to them most likely were their fascinating covers. There were no guides or adults interfering with what I chose to read or buy. And, all this reading later lead to my attraction to Francis Farmer and her startling autobiography. Farmer’s memoir made a deep impression when I first read the book, much like Norman Maclean’s, “A Run Runs Through It,” Toffler’s “Future Shock”, the Ballantine editions of The Hobbit and LOTR, and my precious, “Native Funk and Flash” with its $1 remaindered sticker and winsome looks by another "bad girl," the late Laurel Burch. 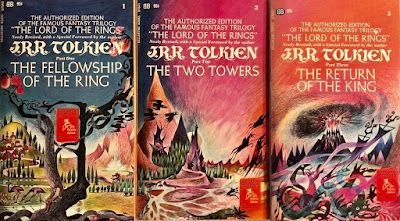 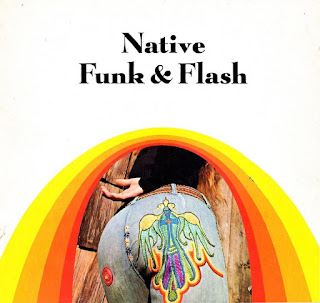