Too many bees! 🐝 🐝 🐝 Or adventures in feral bee removal 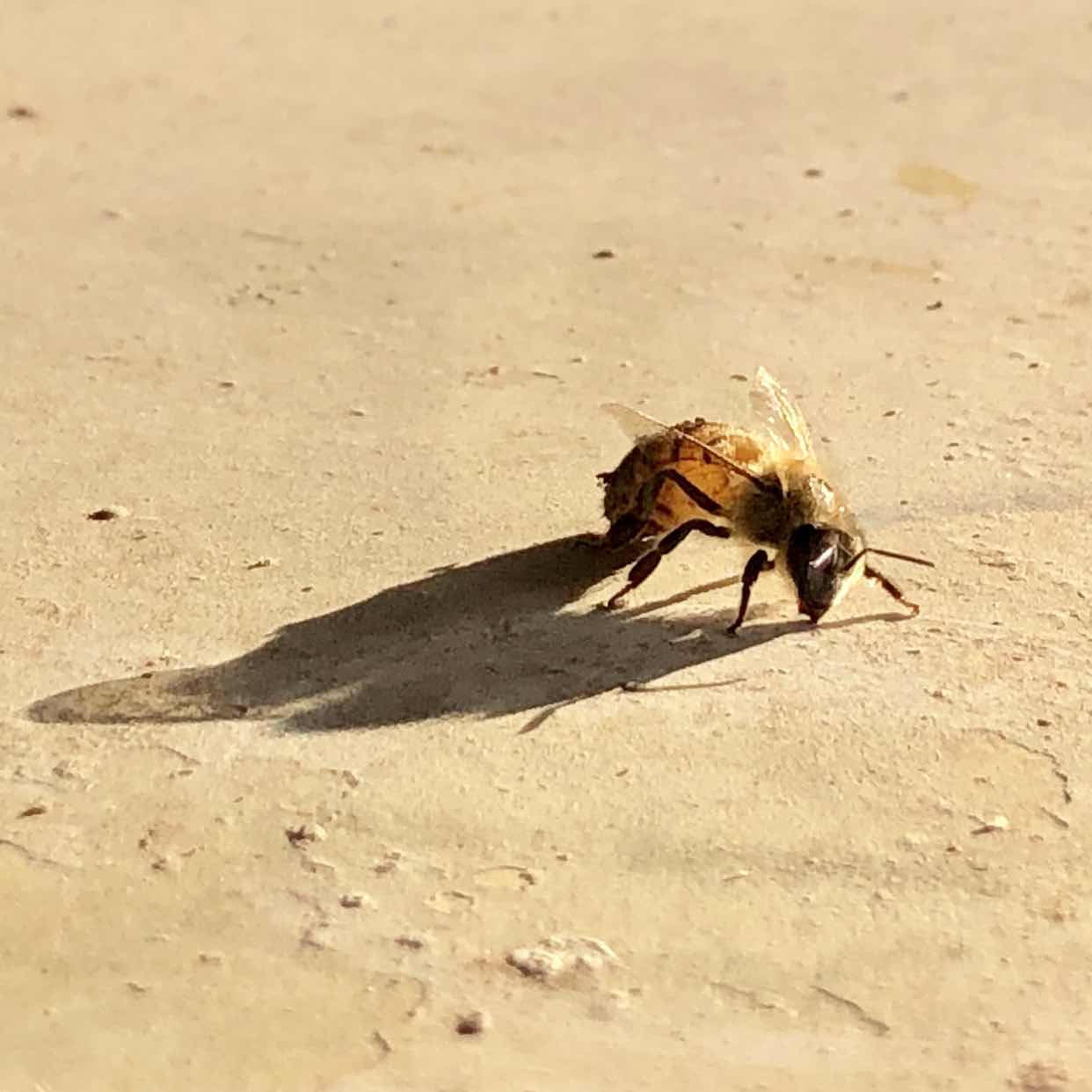 Most likely this little bee is a Buckfast, referred to
as “the mutt of the beekeeping world,”
Beepods

Beepods explains that, “Buckfast Bee stock is named for the location of its hybridization and origin, Buckfast Abbey, in Devon in the United Kingdom.” It is a gentle bee that has been warmly welcomed into the United States for domestic beekeeping, Buckfast bees are a good bee species for “newbee” beekeepers.

Domesticated bees are social creatures. They gather pollen to make their home, honeycombs, and honey to house, feed, and care for their queen, her worker bees, the her one-act male drones. All the while, they prepare for their new queen. As a colony, they appreciate a calm quiet place near moving water.
I’ll be the first to say our yard needs work. And while the control box for the sprinkler system functions, it ended up attracting a colony of sweet tempered feral honey bees. We were unaware we had bees due to where the box is located in the yard. I think they picked our yard because it’s relatively quiet, next to the arroyo, and near what they need and like: fresh water.

Over the course of several years (I don’t think before October 2016 as that’s when the injured owl stood on the green box trying to be invisible) I believe the bees did their bee thing inside the green rectangular box that sits beneath a pine tree that needs trimming.

With the help of friends, I hunted for someone who could use a few new bees. That’s when I discovered the Paso del Norte Beekeepers Association.

By submitting a form on their website, I was contacted a few hours later by a beekeeper named Josh Meier. He meet up at the house, and successfully relocated the queen and her colony. It took a while because that box was packed with combs, bees, and honey.

Generally, bees have a range of between three to five miles. So from our backyard they roamed. They could get as far as the greens of the Coronado Country Club, all the fountains and swimming pools in between, to vegetation, whether native or planted flowering trees and plants. They could roam a bit up the mountainside and gather pollen from the wildflowers blooming since March, and bring back bags of pollen on their legs. Back they'd fly to their green sprinkler control box hive.

In time, the colony grew until our neighbor noticed the bees and how much they appreciated his new fountain. This being after the house stood empty for at least five years. Before then, the pool the new owner replaced with his fountain was covered with a slipshod and highly problematic cover. There was no pool water there or routine sprinklers running.

Up above us on La Posta, someone lounged by a pool and played random pop songs on their tinny iPod speakers (millennial boombox.) Two doors down, a neighbor’s dog barked continuously. The late afternoon light filtered by the smoke of pine needles render the bees drunk and drowsy.

Josh cleaned out the sprinkler control box and collected about five frames worth of combs. In the end he had to vacuum the remaining stray bees who stumbled upon the bee relocation program as they were returning home from a long day gathering pollen in the neighborhood and mountainside flora. He noted any remaining bees will either move on to find another hive, or wait for the queen to return. Sadly, they will live for but a month in all, and may not have long to wait to meet the many earlier queens and other bees who went before them.


As he worked, I asked how he knew he had captured the queen. Josh said he knew so because how quickly the worker bees began clinging to the sides of a box where she now was being held. About the size of a hard-sided carryon bag or big typewriter case (O, alright, like a portable Compaq luggable, circa 1983 ) the box contained the combs that held their queen.

He used pine needles to create smoke that make bees drowsy (drunk). Immediately, the backyard smelled like we were smoking a brisket.

Bees are clever and prolific. Josh said this bee season (spring into summer) he’s had to relocate 40 hives.

Tomorrow, he will cut into a wall to remove another feral hive somewhere else in this county. In addition, he noted our hive was about three weeks away from swarming.

Swarms occur when bees can no longer sustain itself due to its population and must therefore divide in two. One group heads out with the reigning queen, and the remainder stays in place with a new queen in waiting. Chances are they wouldn’t have re-established themselves very far away. Perhaps, just over the fence inside the next green sprinkler control box they found. Good luck bees. May you multiply and divide and make as good of honey as you left here today.

Thanks to Josh for his quick, careful work. And thanks to Ray for alerting us to their existence. And most of all, thanks to the rehomed bees for not colonizing in my courtyard wall, and behaving as sweet as their honey tastes.

Two jars of Backyard Honey™️ 🍯 as @prepgirl77 calls it. In all, we collected about one pint from the combs Josh gave us!
at June 06, 2019 No comments: