Not all who wander are lost: The Value of Genealogy

Ethnography meets Autoethnography
Met two women for coffee this morning. Having traveled from diverse parts of California, and here to conduct genealogical research, they are part of an old El Paso family. They will visit the main public library downtown, UTEP special collections, and their family's graves at Mt Sinai Cemetery, which is adjacent to Concordia. I believe it is the only cemetery I've not visited or captured headstone images. So, I've posted a couple of images from my local cemetery flickr album.
Before my dad died, I researched their family as dad had been a childhood friend of their relative, the youngest son of a large and vibrant family. To help answer my dad's questions, I created a public Ancestry tree containing his friend's parents, siblings aunts and uncles data, then triangulated information using newspapers dot com, city directories, and US census data. It is the only public tree i have let loose. I did this for dad (and me, too) because of dad's funny stories about their brief friendship and how he wondered what had happened to his younger friend. I think they were about 2-3 years apart in age. Dad always marveled at how smart his friend was. Evidently, he had skipped two grades, and I found he attended University of Colorado and majored in engineering. I found pages of his college yearbook and learned what fraternity he joined. Eventually, Dad's friend worked as a satellite engineer in Arizona, and was a university professor. Newspapers dot com helped me view and save newspaper articles about his projects.
After dad and his friend moved apart from their houses on North Florence near El Paso High School, his friend's father died, and this part becomes more interesting from a feminist standpoint. Although the family was involved in retailing, his mother became an immigration counselor for people seeking asylum here before the US entered WWII. She set up an immigration information center on Olive street where a housing development now stands.

It is interesting because the family originally fled the pogroms in eastern Europe and somehow landed here by way of Mexico, as have many other families who settled here. I found articles in the El Paso Herald-Post about his mother, who spoke to women's groups about her work and how those seeking asylum were needing assistance. 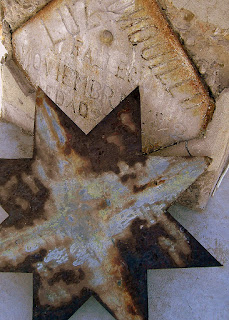 She was very instrumental in helping people enter the states because of Hitler's rise.

As the children grew, his sisters remained here, became teachers, and his brothers served in the military. And now, they are almost all gone from El Paso. It is amazing to me how many different souls from various parts of the world have passed this way, stayed a while, and then moved to other parts of this country.
"Immigrants, we get the job done."
at July 28, 2017 No comments:

For the love of a nib and a pen

Brian Goulet's vlog entry from earlier today was about his attitudes that differ from the broader FP community at large, and he touched upon appreciating broad nibs. This video allowed me to reply (first time) to one of his newsy and low-key review and Q & A videos. Fun stuff. Speaking of broad nibs, Goulet noted that broad nibs are not great sellers and not favored by the wider fountain pen community.

To me, broad nibs allow for a more personalized signature and tend to emulate an oblique or flex nib (thick and thin line) easier.I fi nd extra fine nibs, which i like, too, but they tire my hand sooner. Right now, I have a Platinum Preppy in Extra Fine that I use with my Hobonichi Techno 2017 Planner. My tired hand issue probably stems because I keyboard and text a lot versus handwriting. And, that's my issue. If the issue is the paper, then it's the paper's problem, or the writer's choice of paper used.

It could also be the time taken to dry and that it uses ink faster. Moreover, if the signer is initialing or signing paper printed on laser stock (as would an office worker or lawyer), that certainly would cheapen the feel and aggravate the FP writer--that stuff sucks for handling fluid inks.
Years ago, our fourth grade (I think) teachers took such care to instruct us on prepping our desks (and surrounding flooring) with scrap paper so we could replace our old school student-grade Parker (15) or Shaeffer cartridge pens for the first time.

Today, I always have with me even the inexpensive Varsity or Platinum Preppy FP for my students to sign in to my university composition classes. For many, it is the first time they've used a FP, or they say they haven't used one in years. Always fun to hear and see their reactions to using a FP.
While I don't see fountain pen use and exploration/collecting of the writing implements as a hobby, I find it more as a way of communicating method, process, and a part of life (care and feeding of a valued object.)


Sidebar: If only I could locate my dad's Parker Titanium FP he bought soon after they were released that would make my year. Dad either asked for it back after he gave it to me, or I've misplaced it. (Again, that's a sadness shared with you today.) The good thing is I have the roller ball from that set.

Here is dad, who taught me the value of dogs, fountain pens, and film photography.