The quiet ones with whom we share the land: Mule deer and skunks

Accompanying an announcement reminding students a draft was due soon, this image was included with a note about the deer that live nearby. Added here is a collage of one of several skunks who live around the arroyo, too.

In between reviewing student assignments and meeting with them, I was catching up on newsletter reading. The Twisted Sifter always provides interesting posts about visual artistry and how it intertwines with technologies, whether old and new.


Each video explores how either the editor of the movie or the photographer combine old school technology with new. The real magic continues in the "post production" work, whether adjusting the speed of the video and adding ambient sounds, or taking up to eight hours to expose Burkett's diminishing supply of special film to its equally dwindling inventory of paper.
at April 19, 2018 No comments:

Recently, I've been sharing what I call Sidebars, random information about local items of interest. I send the information along when I send announcements 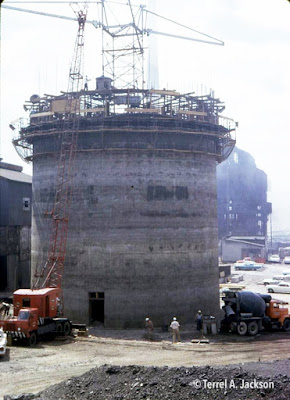 to students via Blackboard. This was the most recent Sidebar, but now I'm thinking I will go back and post more of those here, too.

Image above: In the mid-1960s, after my father worked for The Popular department store for many years, he left to work for a testing laboratory. There, he tested cement, and ran soil compaction tests for many large projects in town, including the now demolished Farah Manufacturing facility (now the site of the Fountains of Farah), Morehead Middle School (concrete corrugated shaped flat roof), the El Paso International airport traffic controller tower, and the tallest ASARCO smokestack, completed in the late 1960s. At ASARCO, dad photographed the construction site at ground level several times and he was even allowed to take me there, too. Between the ages of 7–12, I went to many sites and watched the concrete compaction tests at the lab and helped place cement cylinders in the damp room where they were to be cured for 21-days. The cylinders were capped at the building site with a funky yellow sulphur cap at either end.
For its time, the ASARCO smokestack project was the largest and longest continuously poured cement project in the world. When the regionally grown cotton was ready to be processed into cotton-seed oil, dad worked at the Southwestern Irrigated Cotton Growers Association* (SWIG) processing plant. When he came home after working at SWIG all day in the fall, his short-sleeved cotton shirts were permeated with the smell of refined cotton seed oil.
One Sunday, while visiting my grandparents at their home in Smeltertown, which stood directly across the street from the ASARCO plant, dad got a call to go to the construction site. I begged to go with him and he said yes. We toured the ASARCO site with the project manager and walked inside the tower as seen here. I remember looking up to see the blue sky while standing dead center within the hollow stack. (Shades of The Ring!) Later, when it was complete, dad rode the construction elevator to the top of the smelter tower and shot photos from its platform. Unfortunately, those photographs were given to ASARCO and I never saw them.
By the time the tower was demolished on April 13, 2013, my mom had died in January of that year, and dad had lost most of his sight due to macular degeneration**.
*SWIG: https://archive.org/stream/swigsouthwestern29weav#page/n4/mode/1up
**Macular degeneration is hereditary. However, those who get it in later life were usually those who smoked cigarettes. My father smoked unfiltered Chesterfields from the age of 15 to 58 or so. Not long after he quit he began losing his eyesight.
at April 16, 2018 No comments: