bookshelf
Originally uploaded by chacal la chaise.
This morning, I received an interesting email about the selling of books. It seems that book buyers troll universities looking for those who may want to sell the advance or desk copies of books acquired during the school year. Good timing too as the gift-giving season is around the corner and who doesn't need extra money. Whether I would or not (because I'm not allowed to anyway), is not the reason for writing here. It's about seas of papers and shores where flotsam and jetsam end their days. While I may be scraping off the foam of the idea, I may be incorrect in some of these statements. And, if that's the case, then I apologize in advance. But I think I have it about right.

Until today, I was not aware people actually came around to buy books by the pound, and this got me thinking. In many ways, publishing is akin to the fashion industry in the way that the remainders, overruns, and shelf worn end their days—in landfills, second-hand seller databases and garages, and developing countries. The latter receives remaindered t-shirts, shoes, and pants. It is the former where books end their days. This brings up a weird confluence regarding the publishing industry and tax law. This, I suppose, can also apply to how the fashion industry operates too. Which also happens to vehicles, or any commodity for that matter. But vehicles are also parted out or chopped, while books and to a lesser extent, clothes are resold, redistributed, and recycled by the item. It all still adds up to the idea of books as commodity whether we like it or not. 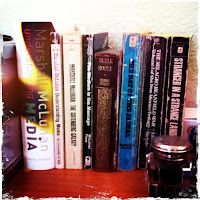 Remaindered books, which are those that booksellers have left over (and at a decreasing rate as physical booksellers are rapidly disappearing,) cannot be donated to libraries or goodwill, and then written off as a charitable deduction. For example, a publisher cannot give away extra or damaged books, and then take the cost of those books as a deduction. This is because they already have COGS (cost of goods sold) factored into their bottom line that was accumulated from producing them in the first place. However, i can purchase books from them (presumably they can give them to me, too) and i can take a tax deduction if i give them to a charitable organization. This is because i don't have a cost of doing business associated with those books (and, as the libertarians would argue, we don't have a flat tax). We get to itemize deductions if we already jumped through the hoops and fallen into Shadow, the homeowner vortex with the much sought after interest deduction. Such a precious.

But what about the books? They become denuded and remaindered, their covers ripped off (paperbacks, for example) and the front matter struck with a magic marker. 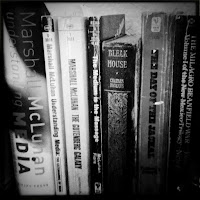 Sounds like rape, doesn't it? These books are shipped from say, B&N or Target to the publisher who must then destroy them. If you've ever bought (or even received books in that condition, you've held contraband in your hands. It all seems so unseemly.

Yes, book publishing is a strange kind of enterprise. We are horrified at the thought of destroying books, but publishers have to do it because of taxes, balance sheets, assets, liabilities, and just plain doing business. Moreover many of those destroyed books end up that way because 1) the price rose and they need a new cover, and 2) they redesigned the cover art because they sold a few and now want to 'refresh' the item, and must now take back the old copies and bring in the new. For a long time now, books are neither a vessel for literature, art, knowledge, information, or dreams. They are simply a commodity with a shelf life, like milk and white bread. I would have added Kodachrome, but we all know what happened to that.
at November 09, 2010 2 comments: