The knitted afghan for curtie by her grandma Lucille 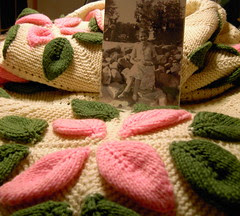 Knitted Afghan by Lucille
Originally uploaded by chacal la chaise.
Before I became pregnant with Curtie, my mother-in-law began a very beautiful and complicated knitted afghan. Everyone in the family would crowd around and question Lucille about just who the lucky recipient would be. Finally, after too many questions, and also exasperated that there was no granddaughter yet, she made an agreement that the first granddaughter would get the knitted quilt.

From the start I had a feeling that Curtie was a girl, so I never thought about the project. But once I had her, that was the first thing that everyone said after congratulations--hey, she's going to get the afghan! First, it was kept in Lucille's cedar chest, safe from sunlight and dust. Later, when Curite graduated from high school, she was given her gift, and we've kept it for her until tonight. Tomorrow, Curtie leaves here and will drive back to Oztown; then in a few weeks, she will leave it for good and strike out on a new adventure in NYC.

It's good she can take with her a part of her family history.
at November 25, 2006 No comments:

The painting in the Judge's room

You have new Picture Mail!
Originally uploaded by curtie.
this weekend, curtie stayed in the judge's room. funny, i've never thought of photographing this painting, although i like it very much. it's very strange having one daughter missing during the holidays and it will happen again next month. that's why curtie came home this weekend because she will have moved to nyc by christmas. which reminds me, i'd better take a picture of the knitted comforter her grandmother made before she takes it home. more to follow.
at November 25, 2006 No comments:

I know they go too far

Nothing much going on this side today. I'm about to sign off, but I thought I would insert a pointer to a new post left on my alternative blog, which shows a darker side.
at November 06, 2006 No comments: