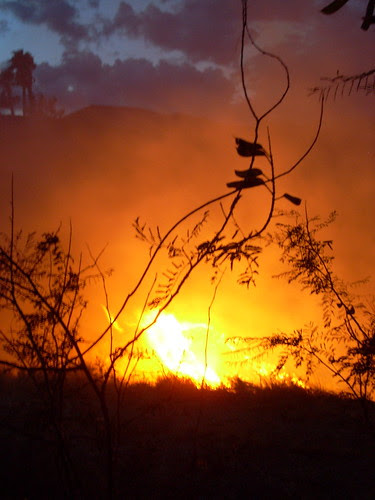 About 8:35 p.m., a 911 call reporting fires in the arroyo behind our home. Many of us went out with hoses to help put out the fires until the fire trucks arrived. All was over in about 30 minutes, but there still is a lot of dry brush in the arroyo; this could happen again until the monsoon begins in earnest. Thanks to EPFD for its fast response.

Update: 07/07/2007. Believe it or not the monsoon season began the very next day. For a while, the season was a decent rival to the floods of 2005, but towards the end, it just petered to a small series of afternoon sprinkles. However, because it was a rather long lasting rainy season, the mountains and this arroyo were very green.
at July 06, 2008

Email ThisBlogThis!Share to TwitterShare to FacebookShare to Pinterest
Labels: arroyo, could fireworks have caused this, el paso, EPFD, fire, via aventura

That is a great picture. I had no idea what an arroyo was till I moved out here from San Antonio.

Thanks for stopping by the photoblog. I love our arroyos and even though we had a fire, I don't think I've ever lived in a house that had such a pretty view, although our house, with its view of the Sangre de Cristo mountains in Santa Fe runs a very close second.

In the early years here we had more wildlife: ground squirrels, quail, foxes, and others. Sadly, while we still have doves and red-tailed hawks, the shy quail have vanished. now we have a deserted ground squirrel apartment complex, and I haven't seen a road runner or collared lizard in about seven or eight years.