Note: this was originally began and then saved from 2013.

On October 4, 2013, NewspaperTree reported results of an inquiry to the Texas Legislative Reference Library (LRL) on how it selected articles for its Daily Legislative Clipping Service (DLCS) news briefing and if it had documented its selection process. What impact does the DLCS have on El Paso/Juarez region (including Fort Bliss) news and information state elected officials? Sounds simple, right? It should have been, yet the Tree encountered umbrage, drama, and delaying tactics after its initial questions were rebuffed, which then led to an open records request, which led to bargaining by the LRL. With all that you'd think they didn't want people to know that the DLCS,
Common sense dictates that we should understand how DLCS chooses its news articles. Yet, judging from the blowback received and information finally obtained, one has to wonder why the Tree encountered such obstruction and digital drama from the good people at LRL. In their article, "Out of sight, out of mind: Capitol news clips keep El Paso stories below the fold" the online weekly notes that,

Under the Texas Public Information Act, responses to requests must be made within 10 business days. Ten days following Newspaper Tree’s request, Camp responded by mail with a $51.80 invoice for the requested materials. Her letter arrived on September 3.

The LRL refused to provide an invoice via email to expedite the payment process.

The responsive documents were mailed to Newspaper Tree on September 9 and arrived September 11—nearly a month following the initial request.

NewspaperTree rightly investigated how DLCS articles are being selected and distributed to politicos in Austin and beyond. As the Tree is part of the fourth estate too, it has a right to know why or why not their stories are selected for the daily briefing.

However, it is safe to assume (not really, but follow me here for a bit), that many people, including elected officials and their staffs could simply Google "El Paso," "Juarez," or "West Texas." But, the kicker is that officials (or aids/interns) must first chose to query El Paso/Juarez borderland news and information.

The delaying tactics and reaction to that simple question makes me wonder if the staff fears for their future. Yet, no small an audience can offset its practical, political, and potentially influential effect upon those who could receive the DLCS. On the other hand, Bob Moore, editor for The El Paso Times believes, as do I, that such a service may have already begun its endgame, when he noted that, "The whole notion of a clipping service in a social media world is really antiquated. It’s just not how human beings share information anymore.”

Yet, if certain parties or influential groups are not truly interested in reading about what's going on here, then how likely are they to be persuaded to ask about and understand our issues? Not very, if history serves. What if they could receive something regularly that provides them with news and information about our region? Because if a team of news sniffers and clippers exists, at least for now, the chances are very good that our issues will be acknowledged and read. That is why we should demand that they explain how their selection process works and is implemented. Once received, what were those results and what does it mean for us?

The "back in the day" moment

This made me recall how a small team of women used to prepare and publish a daily new briefing for the mostly male executives at the company formerly known as El Paso Natural Gas Company (EPNG), El Paso Energy (EPEnergy), and in its end days, El Paso LLC (El Paso). Hm. Seems that the closer you get to one's total corporeality elimination fewer keystrokes make up your moniker. But that's a story for another day. Concerning the corporate method of informing decision makers, here is my take on news clipping process and procedure. While we selected from any and all sources of information daily available, I see little bias or politics in how the articles were chosen. If there was any it was slight because our time to gather, cull, index, assemble, print, and deliver was so short. There was simply no time, unless that bias was unconsciously made, which is possible in any case when quick decisions are made.

From about 1994 until around 2000, Lee Byrd daily edited and indexed, while I sourced and laid-out (cut and paste from hard copies) the daily Newsbriefs clipping service for the executives at EPNG/EP Energy. 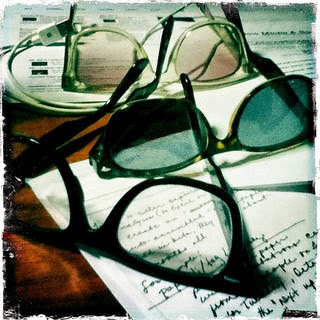 Previously, a long-time analyst edited the daily briefing until she retired. Goodness only knows how many years she worked her publishing magic as she compiled the stories herself, indexed, and published with the help of a paraprofessional. After Lee and I departed the company, the clipping service continued, and evolved into a digital service developed by their in-house IT personnel and used until the company was sold to Kidder-Morgan, Inc. (KMI) in 2012.

I must say that my stint as a "clipper" was truly fun and fast-paced as we worked every morning to provide the original from which copies of the executive news report had to be to the EPNG copy center in the basement of the Blue Flame Building no later than 11:15-11:30 each day. The report usually ran approximately 20-35 pages and contained energy industry and general news and stock information (double sided, not reduced in size) each day, depending on how the news went that previous evening until around 9:30-10 am the day it was distributed.

Our daily default sources included Oil and Gas Daily, energy sector stock prices, which for its time included Tenneco, SoCal, PG&E, and the dread company Enron. Due to its specific audience, we rarely included op-ed pieces unless written by someone in the company with a specific persuasive bent. Sections within the briefs included (transmission) rates, public policy, and environmental/science, petroleum/gas engineering and transport articles as well as the occasional think piece covering exploration, the environment, and world energy/political stories from US News & World Report, The Economist, the pink Financial Times, The Los Angeles Times, and San Francisco Chronicle. Interestingly, we usually did not select stories from Mexican papers, such as El Diario de Ciudad Juárez or other regional papers outside papers in Farmington or the Permian Basin unless a breaking story warranted its selection. In addition, the NewsBriefs was faxed to company executives in its San Francisco, Farmington, Midland, and Houston offices. With that many dispatched pages to so many readers, we committed arborcide weekly.

Lee decided the order and which stories, while I pitched non-industry and trendy-type stories that could be of tangential interest to the audience, which was from the President to the director level. The idea was to have the copies distributed during the noon hour so that the (mainly male) recipients had the report on their desks by 1:00 (after lunch). If someone was flying out on one of the Gulfstream jets (as when Bill Wise, another Executive VP, or perhaps a Director/VP combo, we made an effort to publish earlier. This was at a time when the Teletype machine was giving way to Internet published articles. When I worked with the long-time editor before Lee, she had the stories compiled and indexed and I did the paste-up. When Lee and I worked together, I was compiling stories at home late at night just when the NY Times, Washington Post, Houston Chronicle and The El Paso Times were beginning to publish their editions online. I cut and pasted the texts and then emailed the stories to the office. Overall, we had no guidelines, just stuck to industry related stories that affected their work in the Gas Transmission industry. Later I heard that electronic versions were made available, but interestingly, many executives preferred the hard copies, as they were the most portable and sharable with their managers and administrators. Like cash, the Newsbriefs circulated and recirculated within the offices.