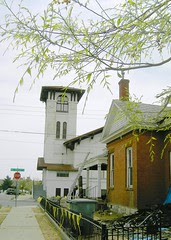 Formerly known as St. George Antiochian Orthodox Church, the 915 N. Florence property faces what the Austin-based organization Preservation Texas calls serious danger. According to an El Paso Times article dated March 28, 2005, its owners (St. Clement's Episcopal Church) want to turn the property into a parking lot. But for now, this mission revival building, constructed in 1910 by renowned El Paso architect Henry Trost, is currently being rented out to a Maronite Catholic Church congregation.

I post this now because the local historical society has applied for endangered status for another building, which is about a mile away. The group and the city met last week to discuss the condition of The Albert B. Hall mansion. All agree the mansion is suffering "demolition by neglect."

Across the street, a house is under renovation; probably conversion into a law office.
at April 02, 2006