New glasses for 2006
Fantastical views! I just picked up my brilliant pair of Rx Ray Bans, and while I need to readjust my driving in order to check 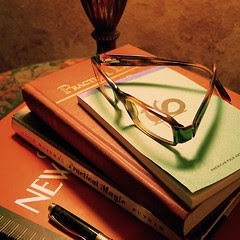 my blindside, everything else looks brighter and more in focus than before. Even my distance vision revived itself a bit, as noted by the optometrist.
Listing to the Left
Everyone these days seems focused (ahem) on getting out their wrap-ups and their best lists for 2005. While I don't indulge in compiling such things, I have seen some which are very interesting. Mainly music lists, these are quite esoteric and always point me to new tunes. I especially like Michaela's (yeah, so sue me for blatant nepotism) list at DEPRAVEDfangirls, and NPR's Best CDs You Didn't Hear This Year aka Most Overlooked for 2005. The thoroughness of the NPR list helps because they nail down several categories, including classical. In addition, is the immense list compiled (in reverse order) by WXPN-FM.

Not all were for music though, as I did receive a notice in my email that grabbed my attention: the Best Fonts of 2005 by MyFonts. What a world we live in where a commercial website codifies such detail in their commodities--and a digital one at that. Thanks, MyFonts.

Wish there was a fountain pen list out there. Anyone? ...anyone?