Here's to the so-called "demise" of film and film cameras

This is just a quick note to vent about a "most e-mailed" article from the New York Times. In Fackler's article entitled, "Nikon Plans to Stop Making Most Cameras That Use Film," I read something that is quite one-sided. 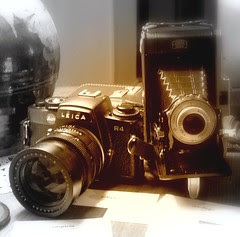 By my way of thinking, all it would take is some major catastrophe, like Sprint being out for 4 days instead of 4 hours, for Nikon, et al., to reverse this trend to digital only. Something like, all digital files were lost because of a brown-out or major power surge, etc. The only thing needed is an understanding that there exists a new generation of film camera lovers, the gen-x, and y's, not to mention us old skool photo bugs. All of us continue embracing film, self-development and-printing, aka low tech. Even the judge, who at 17 prefers her "ancient" Advantax camera to our 5 Mega Pixel point-and-shoot.

She's smart enough to know any affordable digital out there now cannot match the speed of a basic point-and-shoot film camera. She tried (like me) to take candids, actions, and group shots of school life, but all she found was that film is still the most economical and fastest way to shoot pictures, especially when it comes to "recovery time."

Finally, the penultimate line in this article about film cameras disappearing is a blatant misstatement. Here, at Target, Best Buy, etc., film cameras go one for one, model to model against digital--to conclude, the writer does not know what he's talking about.