Originally posted in Heather Champ's ancient (ca. 2001) Mirror Project  (via waybackmachine.org), I offer this for 11-11-11, Veteran's Day. Thanks again to Heather for the project and permission to upload this image. Originally, the project was aimed at people taking their own pictures in a mirror. This posthumous image was one of two that I know were published on the website. 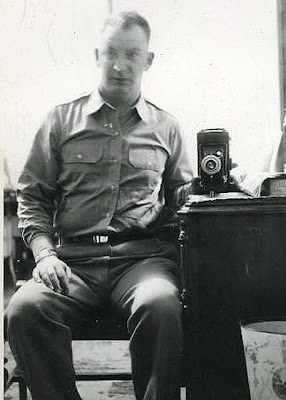 Among the large collection of family photographs, is this one taken by my late father-in-law, Stanley E. Drapes. We have hundreds of photos dating from 1935, but this photo is one of our favorites.

The look on his face and the light from the window helps create a ghostly quality to the image. It helps show the apprehension of being young and in the service.  It is likely this picture was taken in 1940 in his hometown of Stevens Point, Wisconsin. He placed the camera on his wife's, Lucille's, dressing table to steady it.

At the time, he was in Battery "D", 120th Field Artillery, 32nd Division, of the Wisconsin National Guard. The photograph was taken before he was sent to Louisiana for training.

Amusingly, his son Michael, dates pictures of his dad by the amount of hair he had. "This is a very unusual picture for me, as I only knew my dad as bald. In most of the pictures of him when he did have hair, he was wearing a hat."   Stanley retired from the service in the 1960 and went on to work at White Sands Missile Range, settling the family permanently in El Paso, Texas. In 1991, he and Lucille celebrated their 50th wedding anniversary along with their four children, their spouses, six grandchildren and many friends. He passed away a little over two years later.
at November 11, 2011