Lucille and the Royal 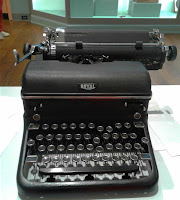 Sunday, November 4, was my mother-in-law Lucille’s birthday. She would have been 101. I say this because one of her proudest moments was how she lent a Royal like this to her neighbor.

Mrs. V was in a bad marriage. Her husband ran around with other women and drank. Once, I was told, one of the women showed up in the middle of the night and threw rocks through all the windows in Mrs. V's house--evidently, her husband had called it off with the rock thrower. Fortunately, his abuse was never physical to her or her sons, and he held a job. Mrs. V felt she couldn’t leave him because of the mores of the day, and that she would receive no support for her sons and her. In short, she needed a job, but had no skills for a decent paying position.

Having hauled the big black Royal typewriter halfway around the world and back, Lucille lent her friend the machine so that she could practice and get her typing speed up for a civil service position at Fort Bliss. I still hear Lucille telling us that there was some reason she held onto her father's typewriter. She concluded that this must have been the reason why. 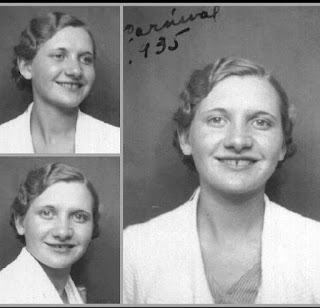 So Lucille and Mrs. V worked together while the kids were in school. She taught her friend to know the ins and outs of typewritten communication. How to insert the paper, use carbon sheets, change ribbons, correct errors, and the like. She practiced, got her speed up, and took the civil service exam. She was hired. In fact, Mrs. V went on to have a great career, eventually becoming an administrator on post. And Lucille was left with knowing she helped a woman make a positive change for her and her family. To her dying day Mrs. V praised Lucille for the help and encouragement she gave.

Non nobis solum nati sumus.
Not for ourselves alone are we born.
― Marcus Tullius Cicero