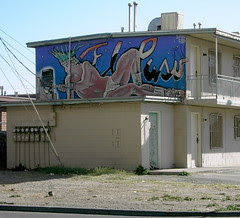 El Paso mural
Originally uploaded by chacal la chaise.
While on the subject of subjects revisited, here is another that was originally photographed with one kind of camera, and later re-shot with another. In this case, this image was shot using a little Vivitar point-and-shoot digital.

Again, this is a mainstay of El Paso iconography; a mural most everyone sees everyday and has affection. Unfortunately, I don't know the name of the artist. If anyone knows, please let me know and I'll be sure to add that information. Located near the Interstate 10 East, Reynolds exit, the mural can be seen from the freeway. It is also near Lincoln park, which is known for its Chicano-themed murals, painted on concrete support uprights for various exit and entrance bridges to either I-10 or US-54 (Patriot Freeway).

Here is the first image take of this mural. It is possibly one of the first Holga pictures I shot. At the time, I think "the judge" aka "prepgirl, my daughter was driving while I shot the picture from the car.